Ben Goldberg grew up in Denver, Colorado. He received his undergraduate music degree from the University of California, Santa Cruz and a Master of Arts in Composition from Mills College. He was a pupil of the eminent clarinetist Rosario Mazzeo, and studied with Steve Lacy and Joe Lovano.

Ben’s group New Klezmer Trio took a slightly different view of Jewish music. Their CD Masks and Faces was listed as one of the ten best recordings of 1992 by Cadence magazine, which called it “great free improvisation.” Masks and Faces and Melt Zonk Rewire, as well as the group’s third CD Short for Something, are on the Tzadik label. Ben’s other recordings include two records by Junk Genius (with John Schott, Trevor Dunn, and Kenny Wollesen), Here by Now (Music and Arts), What Comes Before (Tzadik), Eight Phrases for Jefferson Rubin (Victo), and Twelve Minor (Avant).

Ben Goldberg appears on this CD: 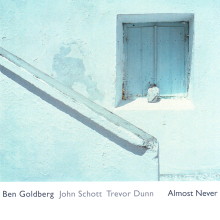