Louis Goldstein has studied with Rudolf Ganz, Joseph Hungate (Bachelor of Music from Oberlin Conservatory), Leonard Stein, Leonid Hambro (Master of Fine Arts from Cal Arts), and David Burge (Doctor of Musical Arts degree and Performer’s Certificate from Eastman). Long fascinated with music of his own time, Goldstein was co-founder and co-director of the California New Music Ensemble and an associate member of the Los Angeles Group for Contemporary Music and Newband, in New York City.

Goldstein’s interpretation of Morton Feldman’s Triadic Memories is considered one of the best of all of the currently available versions. According to Grant Chu Covell at the La Folia website, “This has got to be 2000’s best piano recording. These two discs (Triadic Memories coupled with John Cage’s One5) had better garner prizes and commendations throughout the industry or else Western Civilization is coming to an end. Everything comes together in this phenomenally well-recorded 2 CD set. The piano is rich and closely miked, and the piano’s tuning is superb. Louis Goldstein plays with control and delicacy.”

Louis Goldstein appears on this CD: 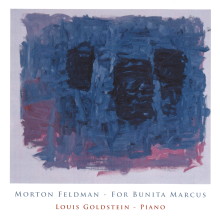