As leader, Gregorio has appeared on five CDs on the Hat Hut label in Switzerland, New York’s New World label, and Chicago’s Atavistic. He has also recorded the music of Anthony Braxton and Cornelius Cardew. As sideman, he has performed with Scott Fields, Franz Koglmann, and Fred Lonberg-Holm.

Gregorio’s graphic scores are works of art in themselves, and have been shown in several museums, including the MADI Museum in Dallas, Texas, where his most recent trio with cellist Fred Lonberg-Holm and vibist Jason Adasiewicz performed.

Guillermo Gregorio appears on this CD: 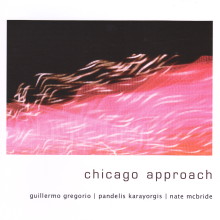